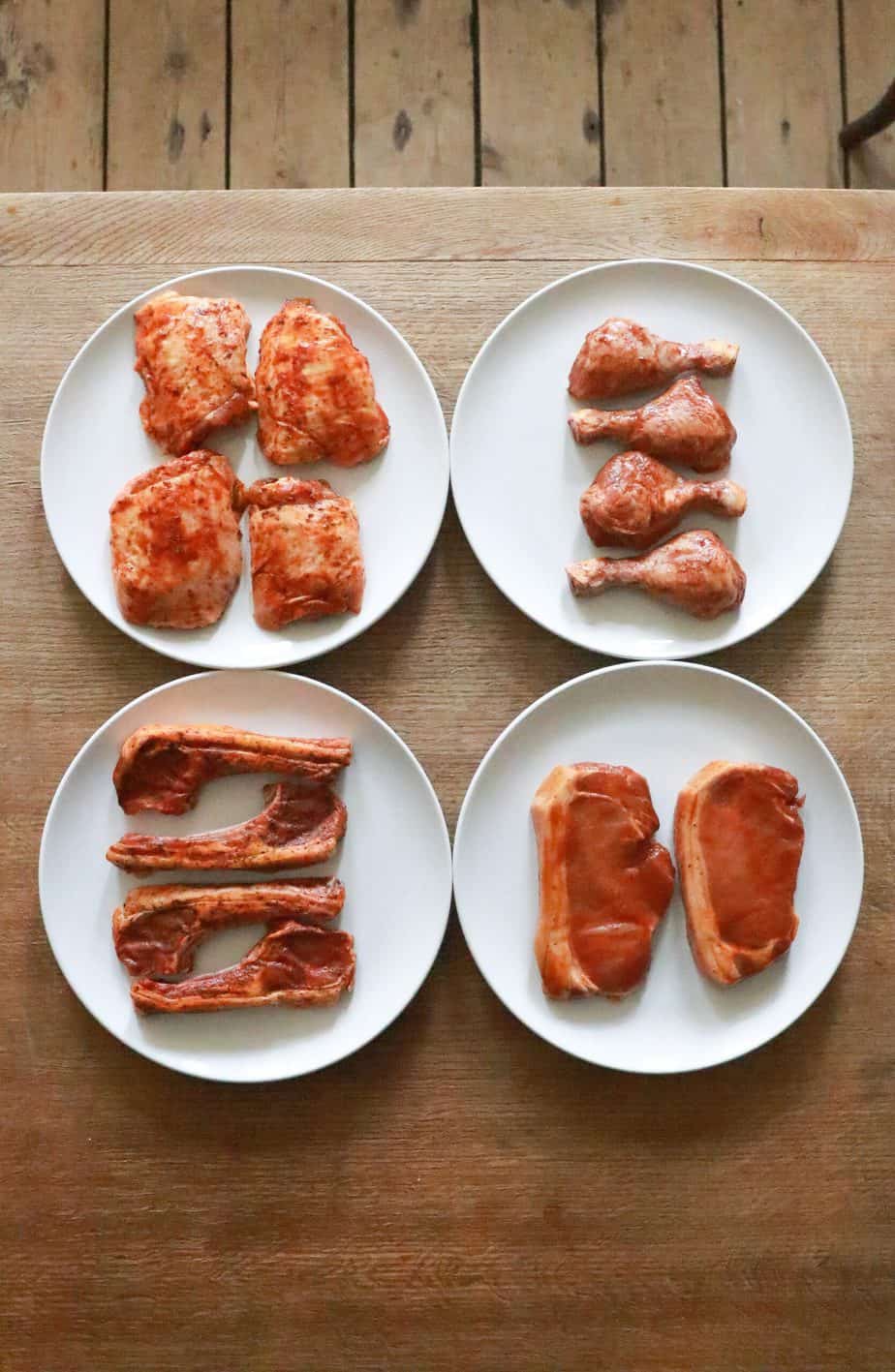 Last week, I bought different types of chicken meat from the market, placed each meat in separate bowls, tightly sealed, and placed them in the refrigerator except the one I planned to cook that day. Each of every different chicken biryani turned out to be so good, and my family loved them.

The meat of broiler chicken is mildly pinkish and has a tender and softer texture. The ingredients required for chicken biryani are different spices, rice (basmati or pandan), white chicken pieces, yoghurt/curds, eggs if any, and cashew nuts, almonds, and dry grapes. It is usually served with different types of raita, a combination of curd mixed with finely chopped onions which is a great side dish for biryani. It also consists of fried onions put over the top layer, giving this dish a crispy texture. The calories in broiler chicken meat per 140 grams are 231 calories

Grass-fed chicken biryani is different from the regular broiler chicken one because of its flavor. Not only this category of chicken is taster, but also the texture is superior. This type has more fat in it than other breeds, which makes it tastier than others. It is because the extra fat from the chicken melts and gives a great flavor when cooked.

You must also know how to make chicken soft while cooking because soft chicken makes a great experience in biryani.

The biryani is prepared by frying the spices and chicken in ghee and curd, chopped onions, and tomatoes. Cook it for 30 to 45 minutes. Once the rice is boiled well, add coloring agents such as Kesar and roasted cashew nuts and ghee. Add fried onions and mint leaves as decorating agents if necessary. Now serve the hot steamed biryani with raita and enjoy it well.

A more detailed blog post regarding how to cook chicken biryani can be found on our website at this link.

The size of kaadai is much smaller when compared to chicken. The meat is somewhat stiffer when compared to broiler chicken meat. The ingredients required for kaadai biryani are different spices, rice (basmati or pandan), kaadai chicken pieces, yogurt/curds, and different types of nuts and spices such as black cardamom pepper, star anise, cinnamon, and bay leaves. Also, kaadai biryani is prepared with ghee instead of oil because the meat is somewhat stiff; ghee ensures the spice flavors penetrate the thick meat deep inside.

The Chicken Liver is different from the meat of other types because it has a different texture and taste when cooked with different spices. Chicken Liver Biryani is a popular chicken biryani across India. Liver chicken biryani tastes good because the liver makes up 50% of the whole dish, unlike broiler or kaadai, where they only make up 25%. So there are more chances that every bite will have some liver pieces inside, which is something special! It might not be liked by many due to the intense flavor, but I enjoy having different cuisines, so my family also enjoys eating them once in a while.

The different spices are fried in ghee before adding the liver pieces to it. The ingredients required for this type of biryani are finely chopped chicken livers, rice (basmati or pandan), yogurt/curds, and different kinds of nuts such as cashew nut paste. This is used instead of oil, unlike other biriyani dishes, because there is more liver than a broiler or kaadai meats.

Grated coconut can also be added along with some ginger-garlic paste if preferred by many people. Also, chicken liver is healthier and has higher protein and vitamins when compared to other chicken meat, which is high in calories.

Lobia Chicken Biryani is different from other types of chicken biriyani because they have a different texture and flavor when cooked with different spices and rice. Also, there are more chances that every bite will have some black-eyed peas inside, making this dish special!

The different spices are fried in ghee before adding the lobia pieces to it. Lobia makes up 50% of the whole dish, unlike broiler or kaadai, where they only make up 25%. So there are more chances that every bite will have some black-eyed peas inside, which is something special!

Black meat is becoming popular due to its uniqueness compared to other meat types. This type of biryani is made from a type of chicken called kadaknath, an Indian breed of chicken. Although different in color, kadaknath has a unique taste and flavor when cooked with different spices. The color of the flesh is dark in color and is soft when compared with broiler chicken.

The taste of this meat is similar to broiler chicken, and the only difference is that the color of kadaknath meat is darker when compared to broiler chicken and a healthier option. You can use either regular rice or basmati rice, and it is entirely dependent on your choice. Both rice has their flavor and texture. The calories in black meat per 100 grams are 214 calories(Source)

This type of biryani can be made of white or dark meat because country chickens are different in color compared to other broiler breeds. The difference lies between males and females(the male has redder flesh than the female).

Country chicken is also called naatu kozhi in Tamil. The meat obtained from this breed of chicken is white, stiff, but tender once cooked with different spices for a long time until it completely absorbs all the flavors. The bone to meat ratio in this chicken is higher when compared to other breeds of chicken. Also, country chicken is a healthier option due to its high protein and low-fat content.

What are the different kinds of biryani?

How many types of chicken biryani are there?

Which type of biryani is best?

How can I make my biryani more juicy?

The real secret to making the biryani juicier is to add high-fat meat and 1 extra cup of water while cooking. This is because the fat melts from the meat and makes the biryani much juicier.

How to make KFC chicken at home – 1 Helpful Guide